After starting construction only five months ago, MCN Build 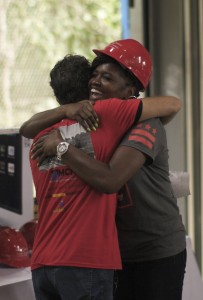 has made incredible progress including adding the final steel beam necessary for the new middle school building. . To celebrate the accomplishment, staff from MCN, Studio 27, and Achievement Prep gathered for a barbecue lunch and tours of the building, complete with remarks by Ruby Seikaly, CEO of MCN Build and Shantelle Wright, Founder and CEO of Achievement Prep.  CEO Wright thanked the crews who work daily to ensure Achievement Prep scholars will have a beautiful and safe new building. She also spoke to the importance of investing in the Ward 8 Community through new construction and innovative design, like that of the Wahler Place Redevelopment Project.

The topping off provided an opportunity to acknowledge the construction crew and thank them for their work. In addition to helping to serve the barbecue lunch, Achievement Prep Platinum Teachers shared their enthusiasm with the crews, cheering them on with a traditional Achievement Prep Shout Out. After lunch, many members of the Achievement Prep Staff took tours of the building, seeing the spaces where offices, classrooms, and assembly halls will be. 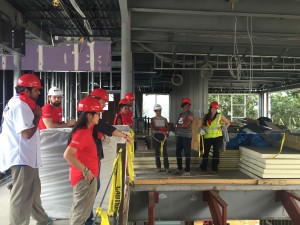 With the framing complete, it is easy to imagine how the new 50,000 square foot space will serve our scholars and our community. The new building will create additional opportunities for community meetings, classrooms that will drive increased learning, and the space necessary for Achievement Prep to continue to expand its influence in Ward 8. The event concluded with a traditional signing of the final beam, during which CEO Wright, together with representatives from Studio 27 and MCN Build, as well as fellow Achievement Prep Platinum Teachers, signed a ceremonial beam, inscribing on it their dreams for the Achievement Prep scholars and the entire Ward 8 community. The beam will become a part of the new structure, acting as a physical reminder of the dedication and hope of the Wahler Place Redevelopment Project team.

Following the completion of the new building in December 2015, Achievement Prep plans to move the existing Wahler Place Middle School Campus into the building (Phase I of the Wahler Place Campus Redevelopment Project). Crews will then renovate the existing middle school building, transitioning it into a space for early childhood and elementary scholars, which will open August 2016 (Phase II). In all, the Wahler Place Campus Redevelopment Project will expand the current 50,000 square foot single building campus for 460 scholars in grades four through eight to a 100,000 square foot two building campus for 930 scholars in grades PreK3 through eight.

Through the vision, dedication, and hard work of Achievement Prep, MCN Build, and Studio 27, the Ward 8 Community and Achievement Prep Scholars will soon have a DREAM building to last for generations to come.