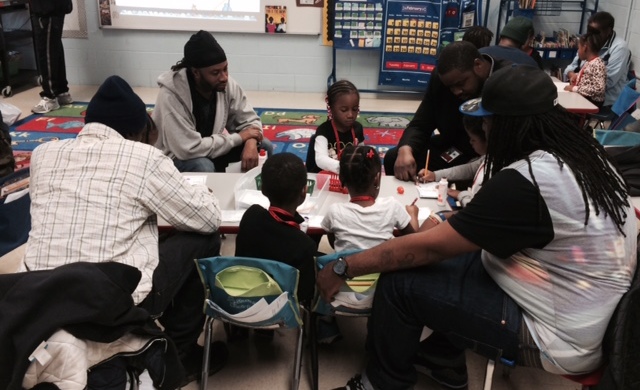 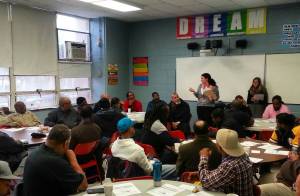 The annual Donuts for Dads events at both Achievement Prep campuses resulted in record turnouts of fathers, grandfathers, uncles, older brothers, and male role models. The January 29 Wahler Place Middle School event saw over 50 dads in attendance, and the February 5 Mississippi Avenue Elementary School event hosted over 100 dads. The events brought together these male influences in our scholars’ lives to treat them to breakfast, give them the opportunity to visit their scholars in class, and to assist them in creating personal goals for the year. The high turnouts at both events support multiple findings that black fathers, despite stereotypes that they are less involved than fathers of other races, are present and active participants in their children’s lives.

Setting a precedent that Parents are Partners in their scholars’ education is critical to Achievement Prep’s approach. Through events like Family Nights, Parents as Partners meetings, Donuts for Dads, and Muffins for Moms, Platinum Parents have a number of opportunities to engage with the school community throughout the year. The prominent presence of these male role models at school events indicates to scholars that their Platinum Parents are just as invested in scholars’ education as the school itself, and creates an important expectation for scholars and Platinum Parents alike. 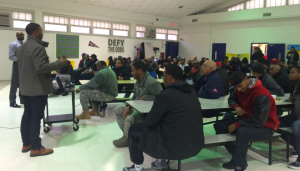 Statistics that debunk the myth of the so-called “absent black father” have been in existence for several years, yet negative stereotypes persist. In 2013, the Centers for Disease Control and Prevention reported findings that African-American fathers are actually more likely to participate in their children’s everyday activities, such as school functions, than fathers of other races. Studies by the Pew Research Center in 2011 support these findings and also conclude that black fathers who live in different households than their children tend to see their children more frequently per month than white or Latino fathers who live apart from their children.

Yet despite evidence from multiple studies and sources that conclude that black fathers are just as involved as fathers of other races—and in some cases more involved, myths that suggest that black fathers are not present persist. Through events like Donuts for Dads, both Platinum Parents and Achievement Prep scholars can, by example, disprove the deeply ingrained myths and stereotypes about black fathers and families that still pervade national opinions in this day and age. 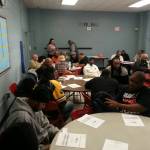 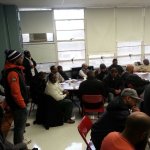 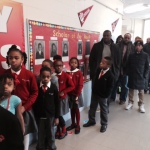 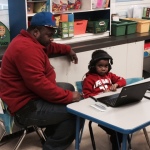