SCHOOLS IN THE PANDEMIC: A REPORT CARD

With Students Missing Online Classes, Teachers Are Going to Students

At a charter school in a poor area of Washington, some teachers spend one day a week going door to door, tracking down students who aren’t logging on, and whose education is suffering. 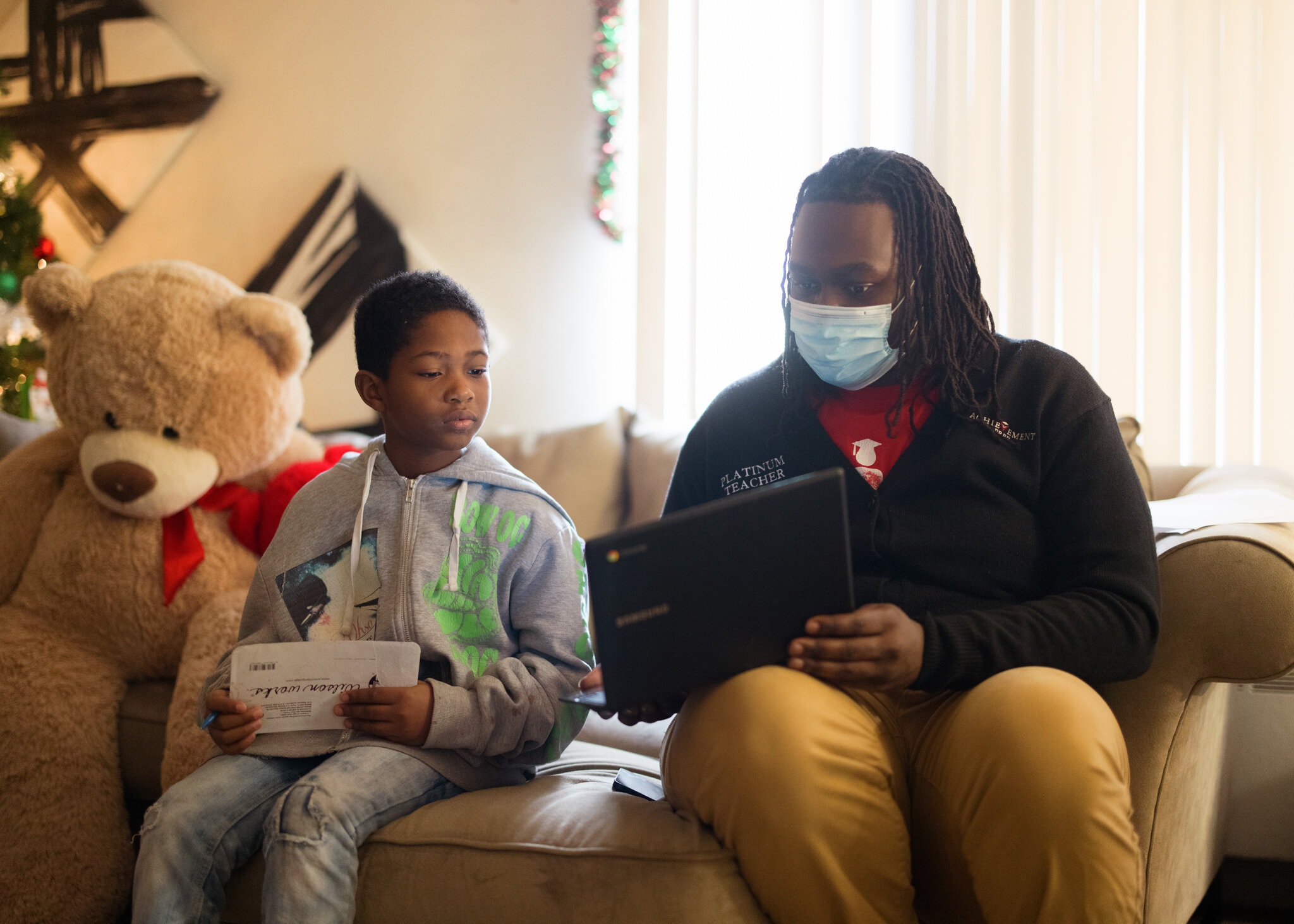 Tylee Wise, a third grader at Achievement Preparatory Academy, got help from Antonio Wilson, a teacher who visited his home last month to help him overcome chronic absences. (Credit: Nate Palmer for The New York Times)

This article is part of a series examining the widely different approaches of U.S. school districts to teaching during the pandemic, and the impact on their students.

WASHINGTON — It was 10:30 a.m., time for math class, and Tylee Wise was in his usual spot — a twin-size bed in the room he shares with his little sister, a television droning a few feet away — when a knock came at the apartment door.

A teacher had come calling, hoping to find out why Tylee, a third grader, was missing online classes again at Achievement Preparatory Academy, the charter school he had attended since prekindergarten. Since the school year started on Aug. 31, Tylee had missed 21 days, a third of the total.

Every Wednesday since September, the teacher, A’Keisha Swann, has set out through southeast Washington, the city’s poorest neighborhood, to visit families like Tylee’s and implore them to make sure the children are “clicking in” to class.

About 20 percent of Achievement Prep’s 200 students were considered chronically absent in early December, a number that was actually down from 35 percent earlier in the fall — but still considerably higher than last year. 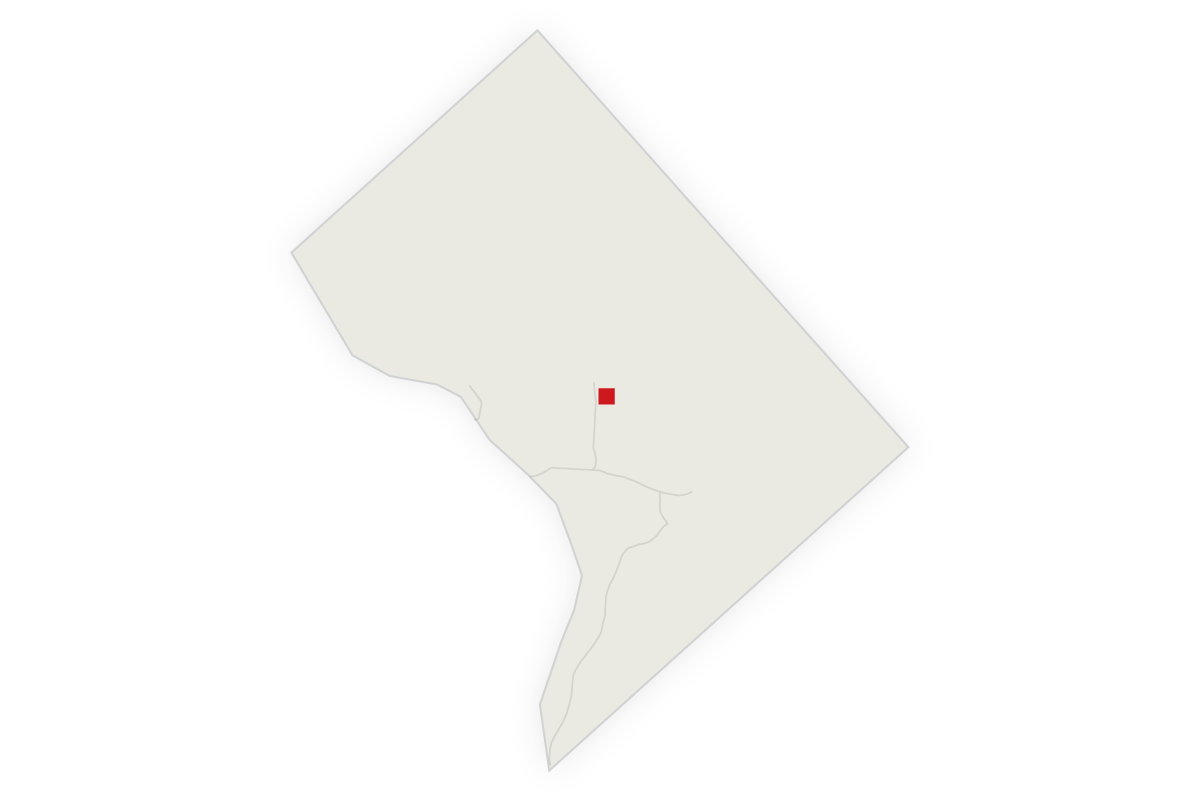 By The New York Times

Making sure that students participate in classes during the pandemic has been a tall order across the country, with districts reporting record-high absentee rates. It can be especially difficult for large urban school systems, which serve tens of thousands of low-income families and, for the most part, have remained entirely remote since March.

The impact on learning is starting to show: A recent study of assessment scores found that public school students in Washington this fall were four months behind in math, on average, compared with a typical year, and one month behind in reading. 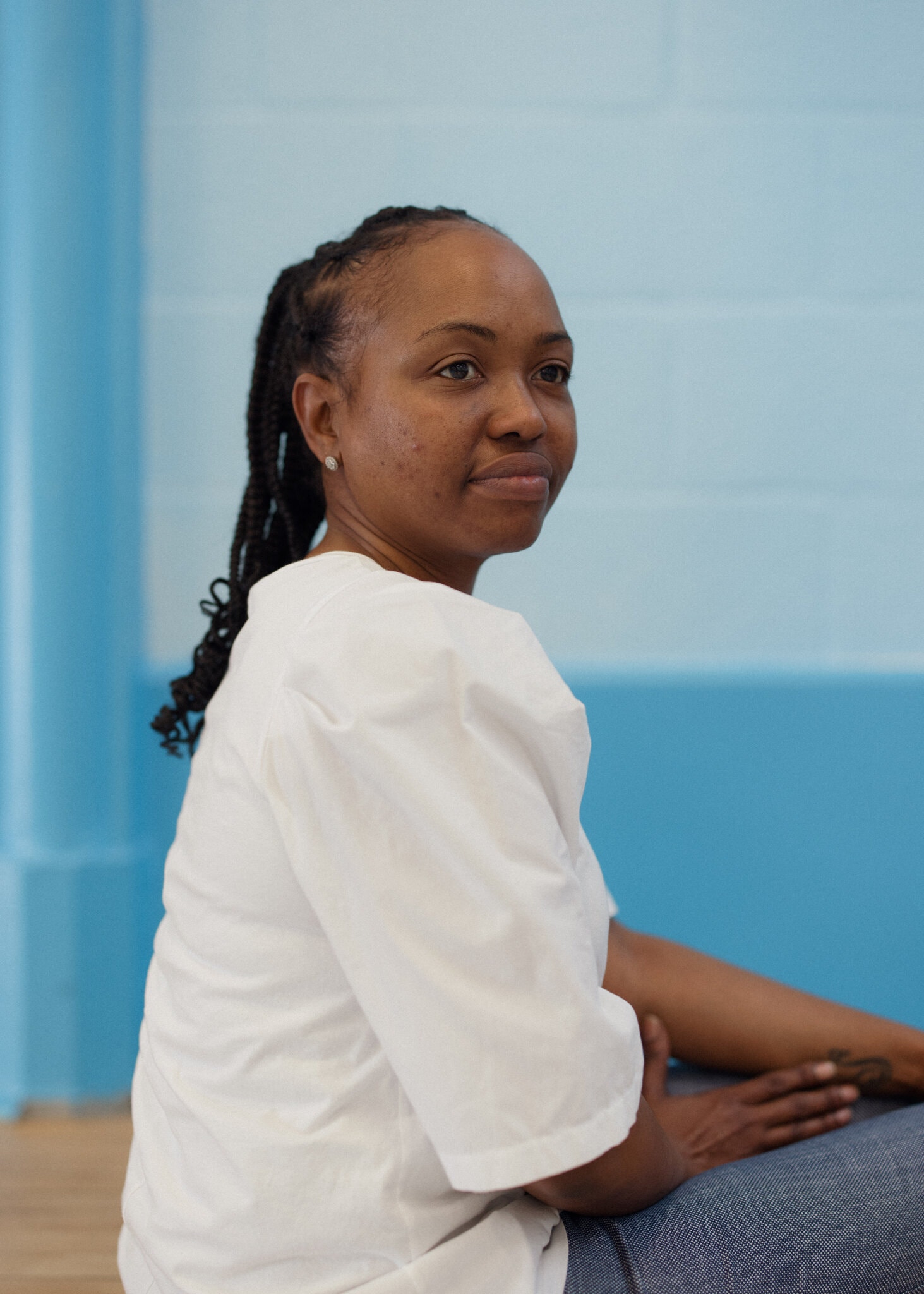 A’Keisha Swann is a member of Achievement Prep’s culture team, a group of teachers and support staff who regularly call families to conduct “wellness checks” and connect them with resources. (Credit: Nate Palmer for The New York Times)

Black and at-risk students — those whose families receive food stamps or other public assistance, or who are homeless or in the foster care system — were even further behind, especially in reading. And virtually all the loss in reading was among students who live in the city’s two poorest wards. Those who live in wealthier neighborhoods made slight gains.

Achievement Prep is one of dozens of public charter schools in Washington that enroll about 43,000 children — almost as many as the 51,000 in the city’s traditional public schools. Most students in both types of schools have learned online from home all year, although the city’s school system is preparing to offer at least some in-person instruction starting next month.

The teachers’ union has strongly opposed reopening, backing out of tentative agreements to do so in the fall even as private schools, and some charters, reopened. Initially, the district did not seek principals’ input on reopening plans, and many parents also felt left in the dark. A December survey found that fewer than half the parents were prepared to send their children back to classrooms, with those in the poorest neighborhoods overwhelmingly wishing to stay remote.

Even in a normal year, Achievement Prep’s challenges are huge. Seventy percent of its students live below the poverty line, and 13 percent count as homeless. But indications are that students struggled even more than usual this fall; informal assessments found that no second graders started the school year reading on grade level, according to Sarah Lewis, the head of school.

Ms. Swann, the teacher who visited Tylee’s apartment, is part of Achievement Prep’s “culture team,” a small group of teachers and social workers who regularly call parents to ask how they and their children are faring, troubleshoot technology and other barriers, and sometimes connect them with therapists who can help address depression and other mental health issues that might be impeding attendance.

During Ms. Swann’s weekly home visits, a handful of families have consistently turned her away, refusing to even open the door when she knocks. “At least just hear me,” she will say. And while they usually listen, grandmothers caring for grandchildren, in particular, are reluctant to engage, Ms. Swann said, likely because they feel so overwhelmed and uncomfortable with technology.

One girl who had never missed school during the pandemic suddenly disappeared for a week recently, Ms. Swann recalled; it turned out that her mother had lost her job, and they had been evicted. Another mother showed Ms. Swann her apartment’s cinder block walls over FaceTime to prove poor connectivity was to blame for her children’s absence.

In yet another family, twin kindergarten students were frequently missing school, and it turned out their mother was six months pregnant and on bed rest. After speaking with her, the culture team brought the family a wireless hot spot to help keep the children online.

“We try to let them know we’re not focused on judging,” said Antonio Wilson, another teacher on the team. 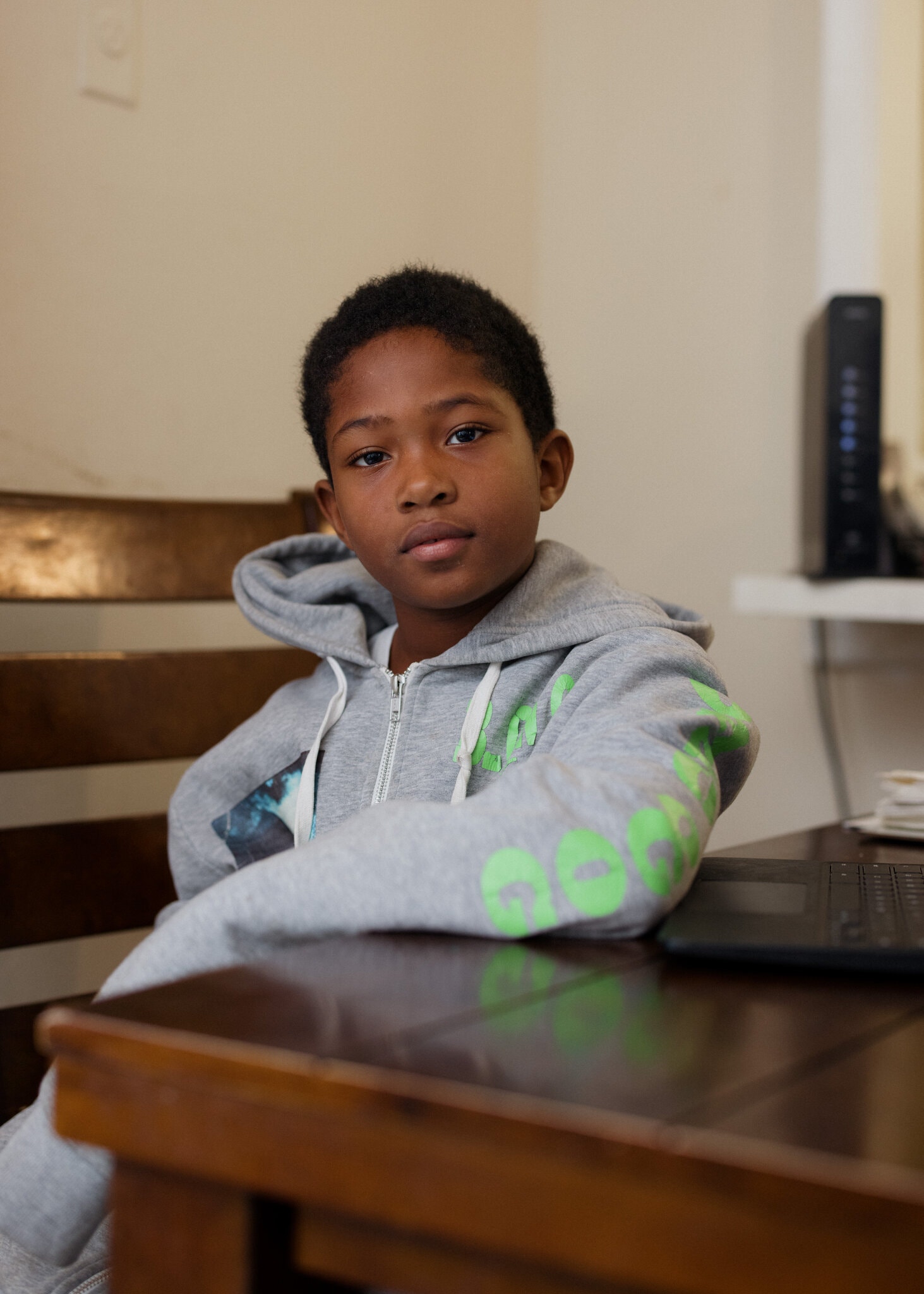 Tylee, 9, at the dining room table that is supposed to serve as his work station. (Credit: Nate Palmer for The New York Times) 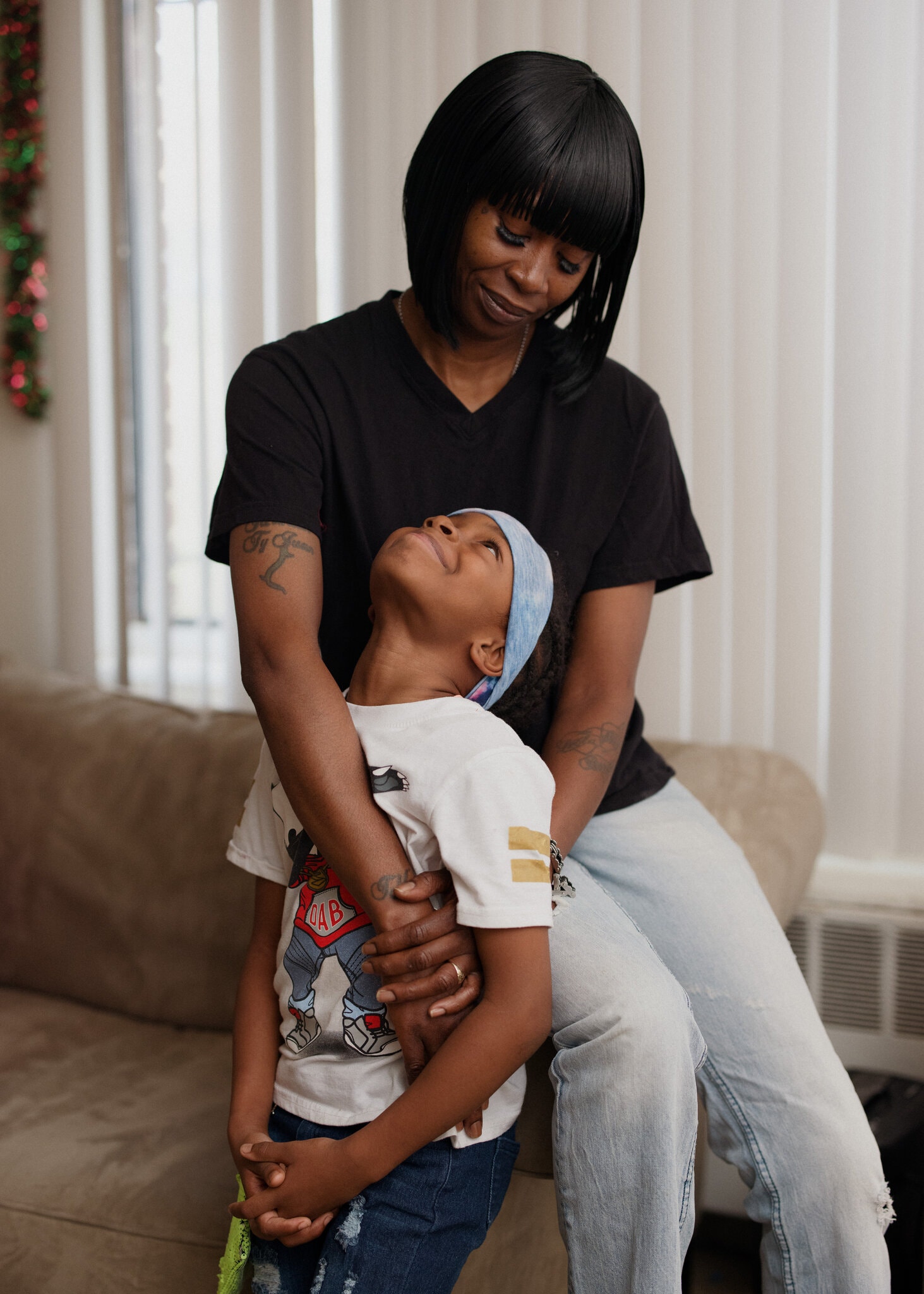 Inside the Wise family’s apartment in early December, Ms. Swann greeted Tylee and his sister, Tynahja, a second grader, with happy squeals — “Hi guys! Oh, look at your Christmas tree!” — and told Tylee he looked much taller than he had in the spring. He brought his laptop to the living room to work with Mr. Wilson, while Ms. Swann sat down at the table with his mother, LaShawla Waller.

“He gets sidetracked very quickly,” Ms. Waller said of Tylee. “Many times I have to be like, ‘Get on your computer.’ Or they could be on it, and then they flip the camera or block it, and then they try to play on their phone.’”

That morning, Ms. Waller added, Tylee had dozed off shortly after class started. “I said, ‘You cannot be on the computer dozing off!’” she told Ms. Swann. “‘Are you crazy?’”

Tylee’s father, Tyrone Wise, broke in to say that the internet connection frequently failed because of the old apartment complex’s thick walls.

From her previous visits, Ms Swann already knew the family’s difficulties: Mr. Wise works outside the home during the day, fixing cars around the neighborhood. Ms. Waller works a 2 p.m. to 10 p.m. shift at the Pentagon, supervising cleaning crews. So there is a period when Tylee and his sister are home alone, and they wait for Ms. Waller to return from work before starting to think about sleep.

Ms. Waller often naps after school starts in the morning, before getting ready for work, and that is when the children are most likely to stray from class, although Tylee has been the most chronically absent.

Ms. Swann repeated suggestions she had made to his parents before: setting up an “official work space” for Tylee, rather than letting him sit on his bed during class, and keeping their phones at the ready, so teachers can text them when Tylee is not logging on.

And for the first time, Ms. Swann brought out an “attendance contract” for them to sign, pledging to make sure Tylee participated in school for the next two weeks.

She knelt down and looked Tylee in the eye. “You going to promise me you’re going to stay online? Because I’m going to check on you. If it’s something embarrassing or there are struggles for you, you can let me know, OK?”

“Sometimes the Wi-Fi logs me right off,” Tylee replied.

“But I need you to log right back on,” Ms. Swann persisted. “Can you do that? It’s going to be challenging, like your father said, sometimes with the Wi-Fi and the way the building is. But I need you to give me some determination.”

Bringing the family some supplies to set up a desk for Tylee would be her next step — one she hoped would make him less likely to log out or fall asleep in class.

For now, another family was waiting for her to visit.

Read and comment on this story on the New York Times

Abby Goodnough is a national health care correspondent. She has also served as bureau chief in Miami and Boston, and covered education and politics in New York City. She joined The Times in 1993. @abbygoodnough