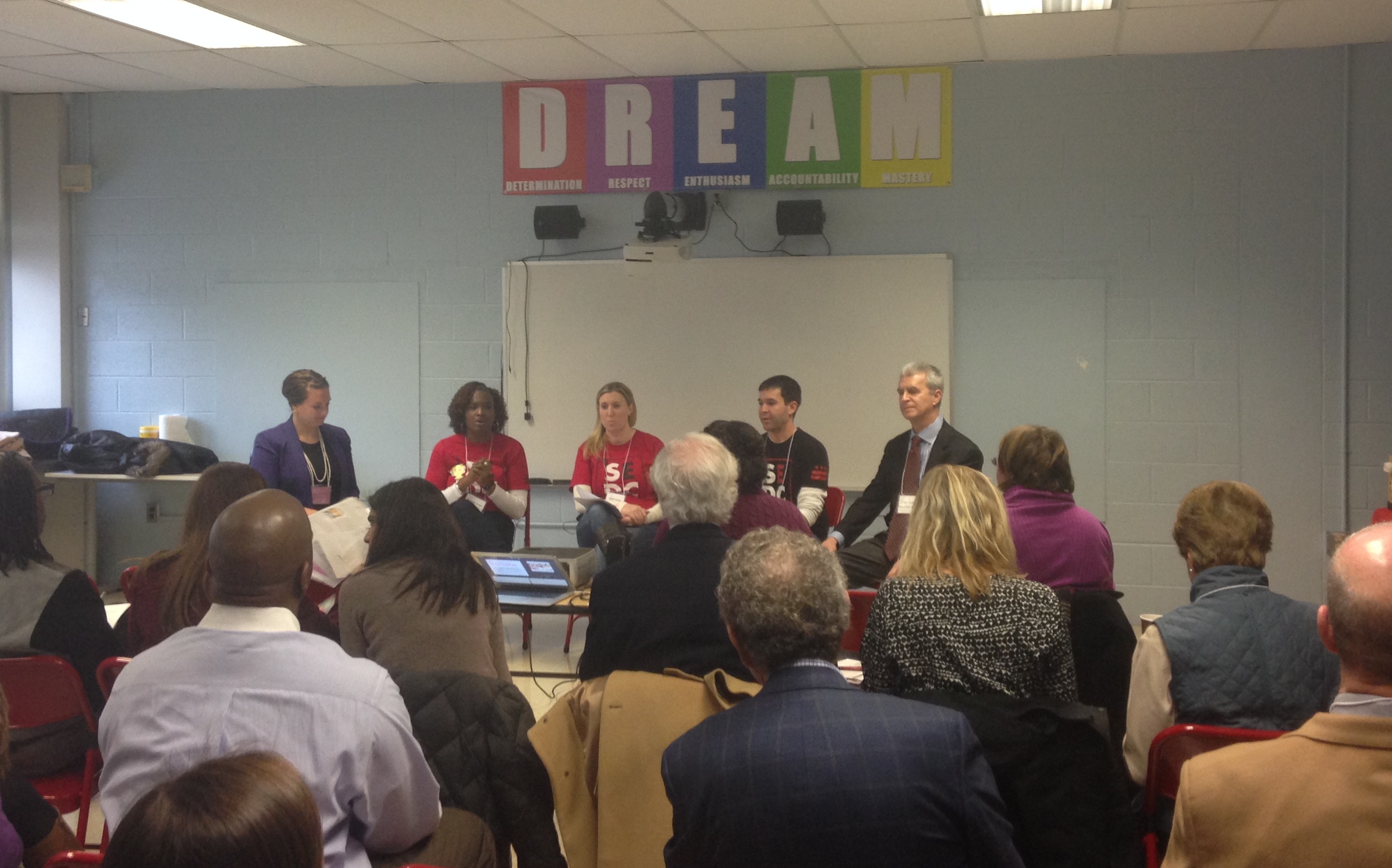 On Friday, February 6, Achievement Prep hosted a First Fridays tour at the Mississippi Avenue Elementary School Campus. First Fridays, founded by the CityBridge Foundation in partnership with FOCUS and Charter Board Partners, are monthly tours of high-performing DC charter schools that bring together community leaders and professionals who are interested in the successes and challenges that DC Public Charter Schools experience. The tour included a presentation on Achievement Prep, classroom visits, and a panel interview with Founder and CEO, Shantelle Wright; Chief Academic Officer, Susie Cannon; Elementary School Co-Director, Michael Rabin; and Chair of the Achievement Prep Board of Trustees, John Green.

By Megan Morrissey, The Center for Education Reform

When I walked down the halls of Achievement Prep. Elementary School last Friday, it became immediately apparent that the standards at this school are extremely high for both faculty and scholars.

At Achievement Prep, the primary expectation is that scholars WILL go on to college. One of the first words that the kindergarteners learn when they arrive is “college.” College banners line the halls. Each classroom is named after the head teacher’s alma mater. I even walked by a bulletin board showcasing scholars’ pictures with the titles “Master’s degree” and “PhD” underneath to show they demonstrated proficiency in a particular academic area.

While observing three kindergarten and first grade classrooms on a guided tour, I was surprised, and very impressed, regarding the efficiency with which classrooms were run. There were at least two teachers present in each classroom, and the pace of instruction was fast and focused.

Scholars were split into small groups, and constantly switching activities to stay sharp during their long school day. Even during activity transitions, scholars had to get settled in a matter of seconds, all the while singing a song and cheering on their classmates to behave. Some groups were doing “Show What You Know” quizzes with their teachers while others were on computers playing interactive games. I walked over to one group and was astonished to overhear scholars learning about poetry and getting quizzed on the word “stanza.”

Shantelle Wright, Founder and CEO of Achievement Prep, explained that educators have to hold their scholars to very high standards so they can measure up academically with other students across the country. Educators know scholars can achieve, therefore, it is up to them to set a high bar. Ms. Wright also explained the sense of urgency in each classroom. Realizing scholars were too far behind grade level when they arrived at Achievement Prep’s middle school, administrators decided to open up an elementary campus.

Yet, when the elementary school opened in 2013, entering kindergarteners were still behind, and there was still an achievement gap to close. This is why scholars are in school much longer than most of their peers elsewhere in the District.

Last Friday, Achievement Prep celebrated its 100th day of school, but there are still 92 more days to go. Scholars arrive by 7:30 and leave at 4:15. There is no time for breaks, and there is certainly no time for naps!

Achievement Prep has found success and there is a method to their madness. The High School Placement & Alumni Programs have placed scholars in some of the most rigorous high schools in D.C. and nationwide. The first-ever eighth grade graduates from Achievement Prep’s middle school campus are now high school juniors, all of whom are expected to go to college. Achievement Prep has consistently received a Tier 1 performance rating from the D.C. school accountability system, and scholars out-perform their traditional school counterparts on standardized tests.

The Achievement Prep model has shown that schools need not “reinvent the wheel” in order for their scholars to succeed. Success starts with high expectations.