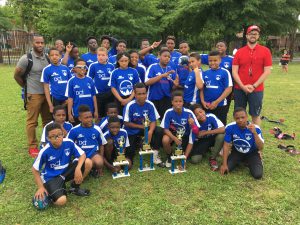 Titan Rugby had an amazing day at the 2017 DC Youth Rugby Tournament. It was a day full of intense emotions and fierce competition. Our freshman, JV, and Varsity teams all performed at a high level.

Our freshman team played courageously, but they were defeated by Raymond Rec in a close semi-final game. Raymond Rec’s Rugby team has multiple championships and they play all year long. Although our Titans suffered defeat, they were still able obtain the 4th place trophy.

Our JV team had a scrappy performance which was highlighted by a stunning sudden death victory. They lost a competitive semi-final game to CMIT South, but they were still able to obtain the third place trophy.

This season was full of teachable moments and our Scholars learned so much about life. Their hard work and commitment ultimately paid off. They learned how to achieve success while doing it in the right way which is a very key lesson. Thank you for all of your support.  GO TITANS!